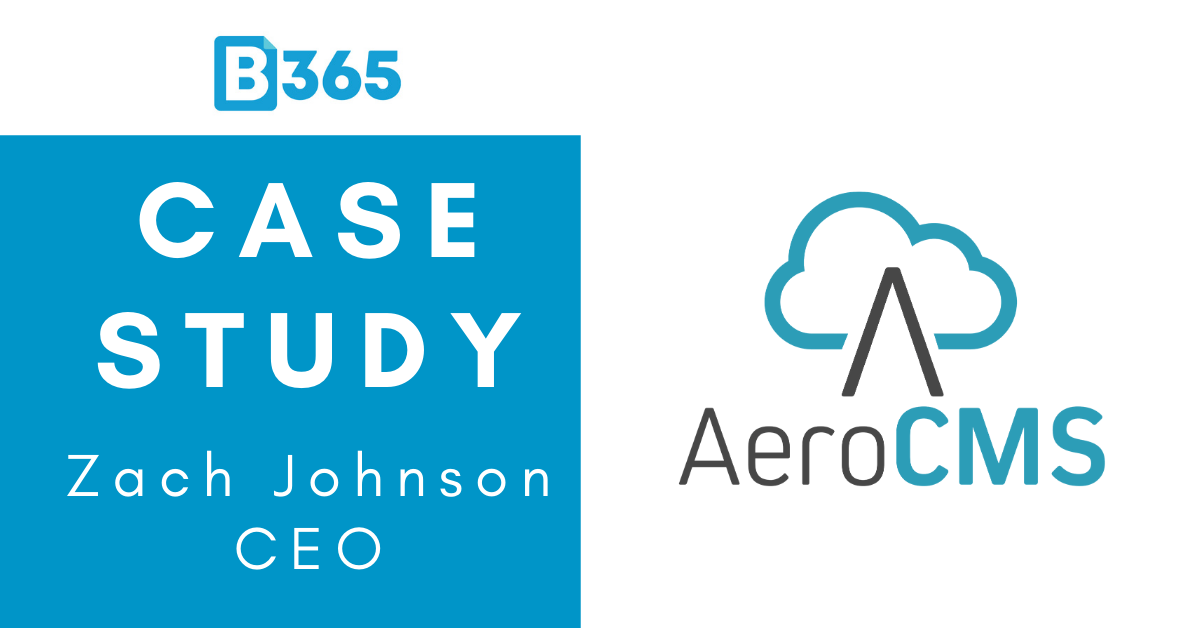 In this Case Study, founder Zach Johnson shares how partnering with Benchmark 365 for 12 months has provided him flexibility and capacity for growth.

Aero Computer Management Solutions is a leading MSP in the Pacific and Mid Northwest USA. They focus on custom, complete IT Business and Security Solutions, 24/7 integrated Cloud Services and hardware-as-a-service. Their highly skilled IT experts will build, maintain and secure any IT environment.

Aero Computer Management Solutions was facing many of the same challenges as other small MSPs on the journey from the solo one-man shop to a more mature growing business. Not enough time, not enough resources and constantly being pulled in a million different directions trying to keep customers happy, find new ones and look after the team. Zach Johnson, founder of Aero explains in this case study.

We actually had a pretty good plan in place – we needed to add redundancy and scalability and we had revenue and profit goals we knew we needed to hit before we either hired or outsourced in order to expand the team. Once we reached a certain amount of revenue, we figured the support would be at a certain level I could handle for a while, but we wanted to avoid basically triaging the workload. For example – do I follow up with this client or do I work on the next issue? If you have to start making these kind of choices then you’re beyond the tipping point.

Like many MSPs, Aero Computer Management Solutions faced the challenge of how to scale, the business quickly enough to take advantage of new opportunities in the fast-growing IT services market.

In a previous role before starting Aero, I had worked for a company that managed outsourced solutions for extremely large organizations. I knew the territory and what was and wasn’t possible. I also had an idea of what I wanted to achieve when I was shopping around for a Partner.

All of them were about what I expected. There was very limited scope in terms of what they would and wouldn’t do at any given time or given SLA – and they are all very expensive. Also, the setup and onboarding were a significant cost.

I probably talked to 15 different outsourcers before James at Benchmark 365. He really set them apart from the outsourcing pack. I was impressed by just how flexible they were willing to be.

When it comes to technical support – it’s all just effort, right? Benchmark 365 was willing to do almost anything I asked of them as long as I produced a good process and gave plenty of feedback on the relationship and delivery. This was a big differentiator and very positive. It’s what really drove my decision to partner with James and the Benchmark 365 team.

It’s about building a better business

Benchmark 365’s core philosophy is that it’s all about partnership and doing what I needed to make my business better. They were open to reshuffling the work so that it aligned with how I envisioned our service delivery.

For example, we developed a platform that allowed technicians to do incident response on potential phishing emails and Benchmark 365 was willing to just follow the training I provided and execute the incident response triage that I needed. I didn’t have to fight. I didn’t have to justify it or make the case. It was just this is how I envisioned doing it and Benchmark 365’s response was, yeah, that totally makes sense – just train one of our leads – who then trained the technicians on the other shifts. Their technicians just knocked it out of the park. They were able to achieve a less than 15-minute SLA, 24/7 365 on anti-phishing operations, which is phenomenal and far exceeded my expectations. It is a shining example, in my opinion, on the greatness of the philosophy and solution as a whole.

There was also some give and take. I actually reshaped some of the ways we did things to better align with how Benchmark 365 operated because, honestly, it just made sense.

The onboarding process for us was somewhat unique in that one of our clients had a client who just wanted a help desk and was willing to pay for it. I literally just took Benchmark 365’s pricing model and packaged it as a standalone service. We basically onboarded the help desk to a client of a client – fully disclosing the third-party relationship.

We as the service provider sat in the middle acting as service coordinators and project managers and made our fee from that. Overall, the process was pretty smooth.

As James is fond of saying, documentation is never actually done. It’s an ongoing struggle – so just tackle it, right? Get in there and start doing it, building it as you go. You will make it work if you put in the effort up front.

Things really get rolling at about 90 days. Between 60 and 90 days is where it felt like it was really moving forward and that’s mostly due to the fact that we had zero documentation for the client going into it.

I feel if we had taken the time to at least do some documentation first, that the process would have gone smoother. We just kind of dove into it and did it by the seat of our pants for the first 30 days. With Benchmark 365 – we made it work though.

Benchmark 365 has a great process for making sure the communication channels stay open. In building out support it’s an iterative feedback process.

If the Benchmark 365 team escalated something to us because they didn’t know how to fix it – it’s a simple matter of fixing it, documenting how you fixed it, and then passing that back to the help desk team. The more you put into the feedback cycle, the less gets escalated and the more cost effective the overall solution becomes. Benchmark 365 has processes in place specifically to facilitate that. It is really, really beneficial.

When it came to transitioning our clients to the new support model, we had a similar struggle that I think all MSPs face in that we had set service expectations that were unreasonable and unsustainable in terms of our average speed of answer and speed to resolution. Frankly at scale – it was untenable.

So initially there was a bit of pushback from the clients because they were no longer dealing directly with me. So you account manage and begin to re-set expectations around what is scalable and reasonable. Then the clients are satisfied. They appreciate the help when they get it – you just have to shift them to the new normal and manage expectations – especially if you were a little too aggressive in your white glove service previously.

But having said that our oldest client on the help desk, who I talked about earlier who is technically a client of ours reselling it to a client of theirs is phenomenally happy. They were very impressed by how far the Benchmark 365 techs would go to get things right.

They occasionally use the RMM remote access tool to monitor the techs as they work and they are blown away by how methodical and focused they are when working a problem. In the early days they were a little sceptical that it could be done, but they came on board very quickly and the model has freed them up them a lot in their day to day operations.

Benchmark 365 has a great process for making sure the communication channels stay open. In building out support it’s an iterative feedback process.

If the Benchmark 365 team escalated something to us because they didn’t know how to fix it – it’s a simple matter of fixing it, documenting how you fixed it, and then passing that back to the help desk team. The more you put into the feedback cycle, the less gets escalated and the more cost effective the overall solution becomes. Benchmark 365 has processes in place specifically to facilitate that. It is really, really beneficial.

Through Benchmark 365’s Partner Forum – MSP’s get to share with each other best practice on everything from pricing models to sales and marketing to customer success.

The transition to the Benchmark 365’s helpdesk really freed us up to shift our focus on to new opportunities in security services which has delivered significantly more revenue over the last 18 months than even our managed services. Over the last 12 months, we’ve increased MRR by 65%. It’s been a real game changer for us.

Another really important metric to me is I’m done with work at 5:00 PM every day. And don’t have to put in time on nights and weekends.

I’m also enjoying being a part of Benchmark Peers and being able to hear how other MSP entrepreneurs are doing and just hearing how they solve the same struggles that I have within my business. I love being able to share my experiences on how we have solved certain problems and how we’ve gone after larger clients, different lines of business and stepped into more diverse revenue streams.

I talked to at least 15 different outsourcing vendors and none of them had a program even remotely like Benchmark 365. They really are partners who are open to doing anything and figuring it out together. That was so surprising because everyone else I’d been talking to up to that point was like – no we won’t do that, or this is how it works or that costs extra.

Benchmark 365’s whole dynamic was so foreign up to that point that it was almost too good to be true. But it is exactly what James says it is – we’ll do what you need- so long as it’s reasonable and fair.

Leverage for the future

One of the bigger outcomes is in my frame of mind and being freed from the burden of feeling totally overwhelmed with no opportunity to progress. That’s something that I’m still kind of plumbing the depths of. But I’m really feeling like I’ve got the opportunity to try things now.  Nine months ago I was in the depths of despair basically.

I’m now pretty much entirely divorced from the service side of the business whereas eight months ago I was up to my eyeballs in tickets.

Looking forward we are really stepping up the game in cybersecurity and we see Benchmark 365 as a key partner to assist us with this. We are great at identifying customer needs and Benchmark 365 is great at providing a flexible team 24×7.

The cybersecurity market is proving to be very lucrative and we are very aggressively moving in that direction. I firmly believe that managed IT and managed security operations are going to merge to a certain extent and I want to be able to capitalize on that sooner rather than later.

Ultimately, Benchmark 365 dispatchers, qualified technicians and engineers, as far as I’m concerned, are my team. I treat them that way and they act that way. My only hesitation in recommending Benchmark 365 would be losing my competitive edge!

I am confident that if you treat Benchmark 365 as a partner, have the same expectations of them as you would of your direct hires and work together accordingly – you will have a powerful engine for your business.