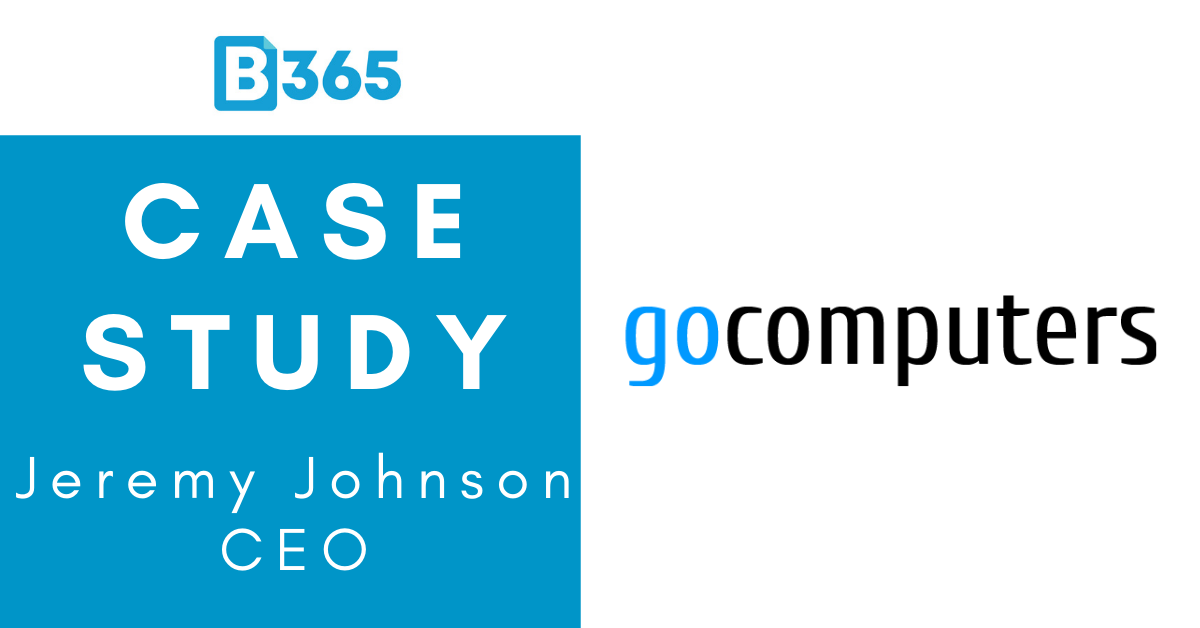 In this Case Study, Founder Jeremy Johnson shares how Benchmark 365 helped him move from spending all his time fighting fires for clients.

Go Computers has been implementing and maintaining profitableIT solutions for their clients since 2005. With a focus on the legal and medical sectors, Go Computers is committed to providing exceptional service. They focus on understanding their clients’ businesses, people and processes and then implement tailored solutions that work for the business as a whole.

Go Computers, like many small MSP’s, put their clients first at the expense of their own business. As Jeremy explains here, he needed a new way to continue to deliver awesome technical support to give him the space to focus on growing his own company.
Since launching in 2005, Go Computers has been through some interesting transitions. In 2011 we merged with a bigger outfit only to go our own way again in 2014. One of the key things I learnt from this experience was how much time, energy and effort it took to manage a large team.
In our new iteration we don’t have a central office – we are the ultimate virtual company with the whole team working from remote locations. Given the challenges I had seen when managing teams in a centralized office – I wasn’t keen to try and do the same with remote staff. But the business had grown to a point where we were pretty heavily utilized from a staffing perspective – including myself.

I was really just fighting fires all the time and if I ever found the time in my day to contemplate business strategy, growth or sales it was fleeting.

It was always onto the next disaster, battle or client issue and I was the only after-hours contact. My tech support was pretty pushed as well and if any staff went on leave or got sick it could cause chaos. We were actually doing a really good job holding it all together from a customer perspective. I guess we were doing the classic dark scenario of “looks pretty cool calm and collected on the surface” but underneath we were suffering like mad.
So I was pretty burnt out and always waiting for the next blow up.

Benchmark 365 is 100% focused on helping your MSP grow profitably. We provide a dedicated team of 1st, 2nd and 3rd level support engineers and customer service/dispatch specialists on demand 24/7.

The big catalyst to make a change happened when my lead tech guy wanted to take extended leave. I couldn’t blame him as he was pretty burnt out too. I really needed a way to relieve the pressure and give me an opportunity be more strategic. We weren’t shrinking but we weren’t growing.

The business was driving me rather than me driving the business. I just felt really trapped. The obvious solution was hiring more staff but having been down that road – I didn’t like the idea of managing an increasing number of people. I had some experience with outsourced NOC back in 2011/12 but I didn’t want to focus necessarily on that side of things – I wanted more customer facing support.

I first heard of Benchmark 365 on Reddit and after listening to an interview with James Vickery – my interest was sparked.

My initial impression was that Benchmark 365 was more of a collaboration than an outsourced situation – which really appealed to me and the way I like to do business.

The fact that it was the whole package was really attractive – from the dispatch side of things being handled as well as the various levels support – as and when required. My ears really pricked up when I learned, at Benchmark 365, you work with the same people day in and day out. They get to know you, your customers and your business. With off-shoring – knowing that the staff is well looked after is important to me too. It was clear there was a real team and family atmosphere at Benchmark 365. Plus I no longer would have to deal with sick days and holidays, hiring and training and so on. That was a big relief.

When on boarding with Benchmark 365, a team of customer service and technical personnel are assigned to minimize the disruption and to tailor the right service model for each MSP.

The key to a successful on-boarding and go-live is to stay with the process. It’s a big change and you have to put in the work.

We were madly working on documentation – because information is everything. We stood in front of tickets at the start and stayed with them giving the Benchmark 365 team as much detail as possible so they could really shine in the eyes of the clients. That worked well 99% of the time but inevitably some things took a little longer at the start – as is normal when you have new people dealing with issues for the first time.

As far as the on-boarding process goes – the lines of communication were always open. With any issues we have been able to raise it, discuss it and find a solution. We’ve done some extra training with the team from time to time where we’ve noticed that there’s gaps. But to be honest any issues come from our lack of documentation rather than a failure of skill or service.

We never really have any issues communicating with the team – we can always get them either via slack or by email. We bring stuff up with dispatch if there are any issues with timing and they are on it. They are a great crew.

The feedback from clients is that the Benchmark 365 is really friendly, highly professional, responsive and eager to please.

After about three months things really hit their stride. It takes a little time to get used to working with the team and them us. It’s really important that you are available initially if there’s ever any questions or issues so that ultimately the client gets their issue solved rapidly. Once it’s learned once – its learned. It’s a little like the training process you might have to go through if you had directly hired. Except for three massive things – no need to hassle with HR; hiring and day to day management is taken care of; and, you can adjust, change or upskill on demand.

Getting costumers on board

As with the Benchmark 365 team, when it comes to customers, over communication is the key. Just really address any elephants in the room. I tell them that while you might be dealing with staff who aren’t sitting next to me – they are as much a part of my team as Neil and Amanda are. We work off the same systems and quite often we’re actually working on the issues together. So although you might be talking to Adrian over in the Philippines quite often we will be shadowing him to help out. I tell my customers to give the new guys a chance and then it’s a matter of relying on the Benchmark 365 team to do a stellar job.

There’s been a couple of instances where people were just prejudiced. In fact one client I let go because there was a difference in opinion on what’s acceptable.  You know that’s going to be the case sometimes. But even if I’m hiring people directly, I’ve got the same chance of hiring a pretty diverse group locally. Once clients get the picture that they’re not being fobbed off but see they are getting a better level of service they are on board.

I tell clients that there’s a big difference between outsourcing and Benchmark 365.

Getting on with it

There’s now a consistency of service and shorter wait times. We were probably over-servicing a couple of customers before who noticed a change in response times. But after a couple of conversations about how little longevity there was in that kind of situation – people have been accepting and now are settled in nicely. Its really about having a more efficient, well calibrated service.

One of our bigger clients said how wonderful it was working with the Benchmark 365 team. She’d been working with the team on a few issues and testing. She said how pleasant they were, and they were really thorough in making sure that the issue was resolved and that there wasn’t anything else that they could help with. In comparison to talking to a call centre where you feel like they’re just trying get you off the phone – working with Benchmark 365 was exactly the opposite experience. Specific feedback on the dispatch and admin teams is that they’re always very pleasant on the phone and they call back when they say they’re going to and are really eager to help.

My personal experience of the team is that they’re just a really lovely bunch of friendly, professional eager people. I enjoy working with them.

One of the bigger outcomes is in my frame of mind and being freed from the burden of feeling totally overwhelmed with no opportunity to progress. That’s something that I’m still kind of plumbing the depths of. But I’m really feeling like I’ve got the opportunity to try things now.  Nine months ago I was in the depths of despair basically.

I’m now pretty much entirely divorced from the service side of the business whereas eight months ago I was up to my eyeballs in tickets.

I only see the very rare issue that I need to get involved in. This is an enormous benefit because it frees me up to get my head clear and focused on the future. My staff have really stepped up – taking on more ownership of different areas of the business which has freed me up even more. I’ve definitely gone from spending no time on deliberate sales and marketing to now being able to think about it every day. I have at least couple of hours where I can think about the business strategy.
The other big plus is from an account management perspective. Whereas previously I was only seeing clients when stuff was broken – I’m now getting around and having chats with people when they’re happy and things are humming along.
It’s worth mentioning too that engaging with James and Benchmark 365’s other clients in the Weekly Partner Forum is invaluable in helping me think about my sales and marketing strategy. It’s great to get their perspective and learn what’s working well for them.
Finally, being able to spend more time with my family and have some time away from the business hasn’t happened much in previous years. Being able to go to a conference or take a break without worrying that the wheels are going to fall off is an enormous improvement on where I was.

Benchmark 365 has pulled me out of the trenches and given me the ability to take control of my business. My only hesitation in recommending Benchmark 365 would be losing my competitive edge!